Devon Railways, for everyday use and railway enthusiasts alike

The railway is a very important part of life for us in Dawlish Warren, providing access around the Exe Estuary, across Devon and Cornwall and to other parts of the UK. Many visitors to Sandays and the Warren leave their cars at home, and local people also use the line extensively for work and leisure.

However our railway line is also of historic and national significance and interest to railway enthusiasts, and often features on television whenever programmes are made about the West Country and the dramatic experience of travelling at the edge of the sea. The remains of a pumping station is a defining feature of Starcross, and a “Brunel Trail” has been created along the coastal path between Dawlish and Dawlish Warren with a number of history boards explaining how the line was built and how it changed the area. The museums in Dawlish and Newton Abbott  both have more information about the line including a specialist railway collection at the Newton Abbot town museum. 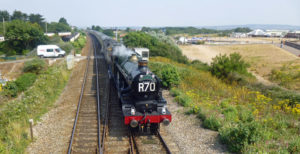 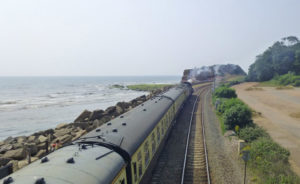 In addition to travelling on, or spotting, the regular trains running through Dawlish Warren we are also fortunate on occasions to see steam trains on the mainline. This is usually of interest to train enthusiasts as well as a lovely sight (and sound!) for everyone. There is a scheduled summer mainline steam excursion run by Torbay Express Ltd that runs through Dawlish Warren on its way to Paignton and Kingswear. The service runs on most summer Sundays during July, August and September, and visitors and trainspotters often gather to watch it go through. The historic train locomotives include the 5029 Nunney Castle, the 4464 Bittern, the 70000 Brittania (which hauled the royal train in 2012) and the 34046 Braunten.

Although it is great watching these trains travel through Dawlish Warren it is also wonderful to take a trip on a steam train. The easiest way to do that from Sandays is to take the regular service to Paignton and then transfer onto the Dartmouth Steam Railway. These trains are simply magnificent and so are the views.
Another option for a trip on a steam train is the South Devon Railway running between Buckfastleigh and Totnes riverside station.

Look out for other seasonal opportunities too, such as the wonderful Heritage Shuttle on the Dartmoor Railway. This runs on Saturdays, Sundays and Bank Holidays from Okehampton to Meldon and is run by volunteers.

What our guests say

"Sandays is a great little B&B, just a few mintues from the beautiful Devon coastline. The people who ran the B&B were really friendly, gave us tons of tips of things to do and see around Dawlish Warren and Devon and have a really nice breakfast. Highly recommended."

Things to do in Devon